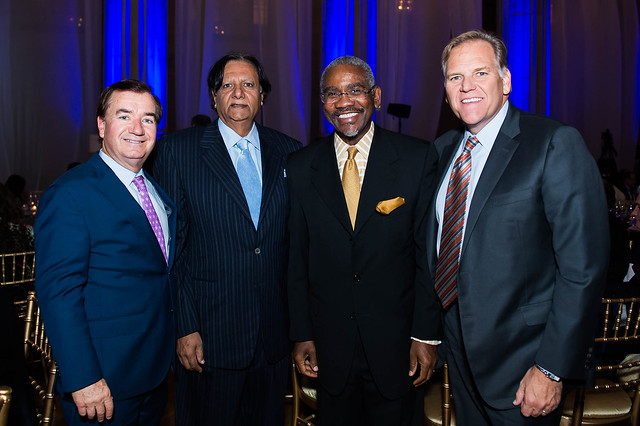 The Power of Film honors outstanding leaders whose work in film and television exemplifies the power of media to educate audiences around the world about critical global issues.

Nasser Al Qasabi is one of the Arab world’s best-loved TV satirists. In 2015, his anti-ISIS Ramadan comedy series Selfie topped ratings region-wide via the pan-Arab MBC network, and won praise from Arab thought leaders for eroding support for ISIS by mocking it. Since Selfie’s airing, Al Qasabi has received numerous death threats from ISIS on social media. Several Saudi clerics have also denounced the show as heresy for mocking the country’s religious establishment. Through programs such as Selfie and its antecedent, Tash ma Tash, Nasser has tirelessly used his platform and talent to advance civil society.  Video

TOLO TV, Afghanistan's largest independent media channel, was the recipient of AAM’s 2016 Partner Award. TOLO TV, part of MOBY GROUP, has worked to advance the values of independent media and pluralism in Afghanistan for over a decade. As the leading general entertainment channel in Afghanistan, TOLO TV attracts audiences up to 13 million with its innovative and diverse programming, ranging from entertainment to news and current affairs. AAM has had a fruitful relationship with TOLO TV and its umbrella organization, the MOBY GROUP, for almost a decade.  AAM first partnered with TOLO in 2007 to produce a weekly public affairs program for Afghan audiences, and more recently to produce a series of successful town halls connecting Afghanistan, Pakistan, and India. Video

In an environment of intense partisanship, Congressmen Ed Royce and Eliot Engel worked tirelessly across party lines to transform and improve U.S. international broadcasting. Congressman Ed Royce is one of the nation’s premier representatives to foreign governments and current Chairman of the House Foreign Affairs Committee. Congressman Eliot Engel is currently in his 27th year as a member of Congress and has served as the Ranking Member on the House Foreign Affairs Committee since 2013. Video

Steven Joel Sotloff was born and raised in Miami Beach, Florida, the son of Arthur and Shirley Sotloff. Upon graduation from New Hampshire’s Kimball Union Academy, Steven pursued his passion for journalism at the University of Central Florida before transitioning to the Middle East where he graduated cum laude, earning a degree in Counterterrorism and Homeland Security from the Interdisciplinary Center. Steven’s insightful and unvarnished reporting from the region was featured in media outlets like TIME, Foreign Policy, The Media Line, Christian Science Monitor, and CNN. On August 4, 2013, while crossing from Turkey into Syria, Steven was kidnapped, along with several others, by ISIS. During the long months until proof of life was finally provided, family, friends, and colleagues worked feverishly for Steven’s release. Tragically, in 2014, Steven was murdered by ISIS, with his killing videotaped and broadcast worldwide. Following his death, Felice Friedson, his mentor at The Media Line, the agency for which he wrote most of his last articles, called Steven, “One of the most courageous, talented, and insightful journalists that [she] has ever met.” Steven’s mother, Shirley Sotloff, and Felice Friedson accepted the award in his honor. Video