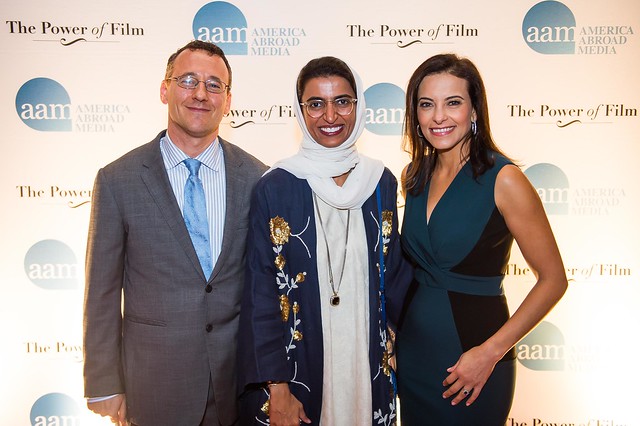 AAM Awards Dinner - in the Media

On November 4, 1979, as the Iranian revolution reaches its boiling point, militants storm the U.S. Embassy in Tehran, taking 52 Americans hostage. But, in the midst of the chaos, six Americans manage to slip away and find refuge in the home of Canadian Ambassador Ken Taylor. Winner of three Academy Awards in 2013, including Best Picture, Argo chronicles the elaborate covert operation devised by CIA exfiltration specialist, Tony Mendez, to rescue the six American houseguests. Directed by Academy Award winner Ben Affleck and produced by Oscar nominee Grant Heslov and Oscarwinner George Clooney, the film was adapted from a screenplay by ChrisTerrio, based on a selection from The Master of Disguise by Antonio J. Mendezand the Wired Magazine article “The Great Escape,” by Joshuah Bearman.

Noura Al Kaabi is the Chief Executive Officer of twofour54, which provides world-class production facilities, training, and business support services to Abu Dhabi’s growing media industry. Through her role as a CEO and a board member of numerous organizations, Noura works to enable a new generation of creative leaders and ensure a sustainable media industry that contributes culturally and economically and to both the UAE and the Middle East as a whole. Noura is currently chairwoman of the Emirates Media Measurement Company (EMMC) board and is board member of the UAE’s National Media Council, Abu Dhabi Media, Image Nation, the Abu Dhabi Sports Council and the United Arab Emirates University. Noura is the first UAE National to be ranked on Foreign Policy magazine’s ‘Top 100 Global Thinkers List’. In 2014, she was named as one of Forbes Middle East’s 30 Most Influential Women in Government; and was awarded ‘Business Woman of the Year’ at the Gulf Business Industry Awards. Noura also received the “Young Achiever Award” at the AmCham Abu Dhabi’s Excellence Awards and was granted the Certificate of National Achievements Record in the category of Creativity and Excellence by The Emirates National Records initiative in recognition of her efforts in serving society and the State.

Produced by Haile-Addis Pictures and Truth Aid Media, Difret, is the powerful and engrossing real-life story of a 14 year-old Ethiopian girl who narrowly escapes becoming a child bride. This narrative highlights the struggle one girl faces against child marriage and the customary laws that often perpetuate such inhospitable conditions for young women around the world. The film’s director, Zeresenay Berhane Mehari, is an award-winning writer/director with more than a decade of experience making films. Born and raised in Ethiopia, Mehari moved to the U.S. to attend film school. He founded Haile - Addis Pictures in 2010 to produce his first narrative feature film, Difret, which went on to become the first film to win the Audience Awards at both the Sundance and Berlin International Film Festivals. Mehari’s wife and one of the film’s producers, Mehret Mandefro, is a producer/writer who draws on her experience as a physician and anthropologist to make films about the social determinants of health. She is currently Producer and President of Truth Aid, a not for profit organization that produces multimedia content about the social barriers to well being and translates research into action.

This year’s Partner Award will be presented to leading Turkish journalist, Mithat Bereket. Mithat has been a correspondent for over 20 years, producing and hosting his own private news magazine “Pusula” (Compass) since 1995. As a roving reporter and war correspondent, Bereket travels extensively around the world for major news stories. He followed the first Gulf War, the war in Bosnia, the Afghan War, the tensions in Algeria, the conflict in Karabagh, the war in Chechnya, the Palestinian Intifada, the NATO Operation in Kosovo and the War In Iraq. Bereket has held several exclusive interviews with leaders, politicians, opinion-makers and other prominent public figures including Nelson Mandela, Benazir Butto, Benjamin Netanyahu, Bill and Hillary Clinton, Muammar Al Gaddafi, Yasser Arafat, Yitzak Rabin, Mikhail Kalashnikov, Madeleine Albright and Henry Kissinger. As one of AAM's first international partners, Bereket has produced multiple documentaries in partnership with AAM, including a documentary on Religious Freedom and the American Experience; a 2-part documentary on Islam in America; and a 2-part documentary series examining Internet Freedom in Turkey.