The Power of Film honors outstanding leaders whose work exemplifies the power of media to inform, educate and empower citizens about the critical social and public policy issues of our time. Join the conversation: #poweroffilm

AAM Awards Dinner - in the Media 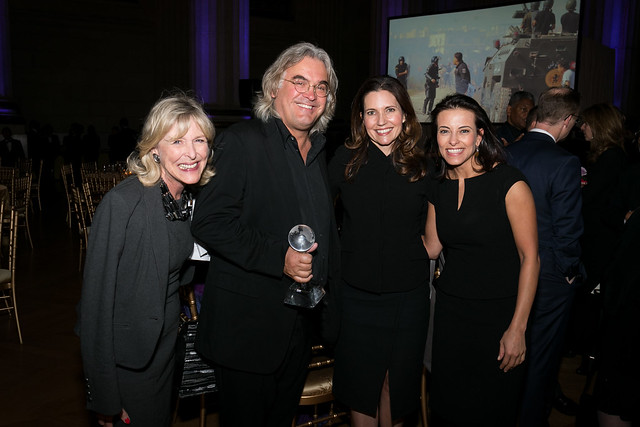 Turki Aldakhil is a leading Saudi journalist and public intellectual who contributed to the establishment of Al Arabiya, a leading source of news across the Middle East and North Africa. For ten years, his television talk show, Spotlights ("Idha'at") has aired weekly on Al Arabiya to an audience of tens of millions. Inspired by his time spent in the United States, Aldakhil co-founded Elaph, a popular online news magazine, and Alarabiya.net, the TV news channel's online presence and currently the highest-traffic website in the Arabic language. Aldakhil is also the founder of Al Mesbar Studies and Research in Dubai. In March 2014, Arabian Business Magazine ranked Aldakhil among the world's 100 most powerful Arabs.

This year's Partner Award will be presented to famed Pakistani actress, director and producer Reema Khan. Appearing in over 200 films, Khan debuted as an actress in the film Bulandi in 1990. In 2006, she made her debut as a director and producer with Koi Tujh Sa Kahan. The movie won the Best Film award at the Lux Style Awards in 2006 and Reema took home two awards herself for Best Actress and Best Director. In partnership with AAM in 2013, Khan starred in the Pakistani television series Reema Khan's America. The series follows her as she sets out to discover her new country through the eyes of the average Pakistani, testing stereotypes about life in the U.S. and exploring what it means to be an American.

Founded by Dan Cogan and Geralyn Dreyfous, Impact Partners is a unique organization that brings together philanthropists and filmmakers to produce award-winning documentaries on pressing social issues. Impact Partners aims to produce films that not only entertain audiences but also enrich lives and ignite social change. Since its inception in 2007, Impact Partners has been involved in the financing of over 45 documentaries, including The Cove, which won the 2010 Academy Award for Best Documentary Feature; and Hell and Back Again, which won the Documentary Grand Jury Prize and Cinematography Award at the 2011 Sundance Film Festival, and was nominated for an Academy Award for Documentary Feature in 2012.

Academy Award nominated director Paul Greengrass spent the first decade of his career covering global conflict for the ITV current affairs program World in Action. He then went on to produce and direct several blockbuster films. In 2006, Greengrass wrote, produced and directed the powerful dramatic feature United 93, the story – told in real time – of passengers and crew rallying against hijackers on September 11, 2001. As a result, Greengrass earned an Academy Award nomination for Best Director in 2007 and a Best Original Screenplay nomination from the Writers Guild of America. Most recently, he directed the Academy Award nominated Captain Phillips, starring Tom Hanks, based on a true story of the Captain of the MV Maersk Alabama when he was taken hostage by Somali pirates in 2009.