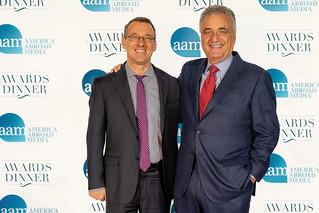 Masih Alinejad is an Iranian-American journalist, author and political activist. She is known for her longtime criticisms of the Iranian government, ultimately leading to her exile, which she describes in her recent memoir "The Wind in my Hair." In 2014, Alinejad launched her "My Stealthy Freedom" campaign that allows Iranian women to share pictures of themselves without a hijab. The campaign has attracted international attention, and her followers on Facebook and Instagram now reach in the millions. While she is not opposed to the hijab, she believes it should be a woman’s personal choice. Alinejad is also the host of VOA Persia TV’s show Tablet which focuses on cultural and social issues involving young people in Iran and the US. She has won several awards including the women’s rights award from UN Watch’s 2015 Geneva Summit for Human Rights and the Omid Journalism Award from the Mehdi Semsar Foundation. Her work has been featured in a variety of publications such as Huffington Post, TIME Magazine and the Washington Post.

Peter Berg is an American director, writer and producer well-known for his true-life films such as Lone Survivor, Patriots Day and The Kingdom, as well as documentaries about US Special Operations including The Warfighters and Live to Tell. His work is renowned for its patriotism and ability to capture the strength and resiliency of the American spirit. He also has experience acting in films such as Never on Tuesday, Collateral, and Lions for Lambs, and writing for Friday Night Lights and The Losers. In addition, Berg is the founder and leader of Hollywood production companies Film 44, Film 45 and Film 47. Film 44 specializes in developing and producing powerful scripted entertainment and has produced several of Berg’s films including Lone Survivor, Deepwater Horizon, Patriots Day and Friday Night Lights, while Film 45 creates non-scripted entertainment and branded content for film, television and digital platforms. Berg also has advertising experience, having directed two major 2019 Super Bowl ads: NFL’s "100-Year Game" and Verizon’s "The Coach Who Wouldn’t Be Here," and Film 47, the newest addition to his production brand, focuses on working with collaborators across advertising.

Yousra is an internationally acclaimed Egyptian actress and producer and one of the Arab world's most prolific icons. Yousra has starred in over 100 film and television roles over her 30-year career, many of which tackle important social and political issues. She received over 70 awards at festivals, such as Cannes, Venice, and Cairo. Three of her films were selected among the 100 Best Films in Egyptian Cinema History: Hadoota Masriyyia (An Egyptian Tale) (1982), Al Avocato (The Lawyer) (1984), and Al-Mohager (The Immigrant) (1994). Yousra is also and active humanitarian, and the UNAIDS Goodwill Ambassador for the Middle East and North Africa. Yousra has been named one of the world’s 100 Most Powerful Arab Women and the 50 Most Influential Arabs.